Save Monuments, Save Heritage

There will be a time where no one has to walk for viewing Taj Mahal or Qutub Minar, because recently proposed amendment will make it little bit easier where everyone can view them from their windows. Encroachment in these sites or other ASI sites is increasing due to urbanization and industrialization. India is a very rich in various heritage sites, some of them declared as World Heritage Sites by UNESCO also. All these sites have to face an upcoming destruction which is under construction in Parliament.

Recently, a bill was introduced to bring various amendments in the Ancient Monuments and Archaeological Sites and Remains Act, 1958 on 18th July 2017. These monuments have been preserving our cultural, emotions, civilizations since ages. They have been representing India on world map since centuries. Several Monuments, out of them have been declared by the UNESCO as heritage sites such Sanchi Stupas, Bhimbetka In madhya Pradesh, Ajanta-Ellora Caves. A more efforts should be given for protection and preservation of these sites rather than curbing their freedoms and its importance by curbing them through various rules for the benefit of urbanization or industrialization.

Cultural values associated with these monuments shows us our history, struggle, developments. Preserving such sites is very important to showcase the world our cultural history through these monuments or archaeological sites. These heritage sites have been the face of our civilization. They need protection than encroachments. We all have our vested pride in it, where people around the globe come and visit these places. These sites glorifying our culture not only us but throughout the world. A step should be though for the betterment and preservation of these sites. How to protect these sites should come in first place rather than damaging or destroying these sites in the name of urbanization and industrialization. Destruction not only affects these sites but it will destruct the very foundation of our civilization, tourism, culture.

To preserve these sites, several initiatives have been taken. Mr. Jawahar Lal Nehru, First Prime Minister of India had opposes such construction which was spoiling old and historical sites. Indian Constitution, under Art. 49 which confers one of the fundamental duties regarding protection of monuments and places and objects of national importance.


"It shall be the obligation of the State to protect every monument or place or object of artistic or historic interests, declared by or under law made by Parliament to be of national importance, from spoliation, disfigurement, destruction, removal, disposal or export, as the case may be."

India is also a signatory of World Heritage Convention which is an international convention of Protection of the World Cultural and National Heritage, 1972. India has passed several laws for the protection of these monuments. In 1951, India has enacted The Ancient and Historical Monuments and Archaeological Sites and Remains Act. All such sites and monuments declared as archaeological sites, monuments of national importance and such sites should be protected, preserved. Another step was taken further to protect these sites under The Ancient Monuments and Archaeological Sites and Remains Act, 1958. It has restricted the encroachment in protected areas. In 2010, limit of protected area was considered of 200(two hundred) meter. Now recent amendment proposed discussed the same limit as 100(hundred) meter. In such limit construction work is prohibited but Central Government in the name of public work might encroach it. Public work defined in the same as construction of any infrastructure that is financed and carried out by the central government for public purposes.  This infrastructure must be necessary for public safety and security and must be based on a specific instance of danger to public safety. Such provision will give power for such construction at least. Mechanisms provided under the bill were not effective as well.  Slowly limit of protected areas is getting decreased and power to Central Government is also given where such limit can be reduced under certain condition.

These monuments should be left alone and should be damaged due these constructions in the name of public works. Once such constructions start, there will be no way such encroachment can be supervised properly. Such power will be resulted in a huge impact on these monuments. These remains should always be remains, only then we can understand its value. Judiciary should interfere with these issues like they have done previously in Taj Mahal Trapezium Case or in Subhas Dutta v. Union of India.

We save our heritage, our history, our culture only by preserving these monuments, sites which are more than 100 year old, still stand on their ground making us proud and frame us at global forum. We should give them value by preserving not by protecting through constructions. Saving them, will surely save our heritage.

(Opinions expressed in this blog are the personal opinions of the author.)

Save Monuments, Save Heritage

Sanchi Stupa, Sanchi, Madhya Pradesh There will be a time where no one has to walk for viewing Taj Mahal or Qutub Minar, because recen... 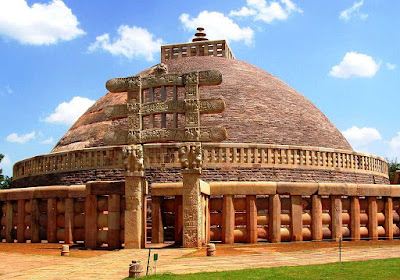